Back to All News

YOTVChannels heading to the Martyrs' day in Namugongo 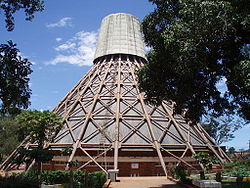 On 3 June 1886, 32 young men, pages of the court of King Mwanga II of Buganda, were burned to death at Namugongo for their refusal to renounce Christianity. They were Anglican and Catholic. Annually on 3 June, Christians from Uganda and other parts of the world congregate at Namugongo to commemorate the lives and religious beliefs of the Uganda Martyrs. Crowds have been estimated in hundreds of thousands in some years.[3] In June 2015, an estimated 2 million people attended the event.[4]

The Namugongo Shrines were first recognised by Joshua Serufusa-Zake (1884–25 June 1985) when he was the Sabaddu of Kira Sub-County. He constructed a structure at the Namugongo site, where it appears shrines were built later for prayer.

His interest in Christianity was enhanced by his father's participation in the wars that brought Christianity to Uganda. His father, Semei Musoke Seruma Katiginya, had earned a name for brevity "Ngubu" from the wars.

Churches are in areas where martyrs were killed, and they are also honored on churches' murals and stain glasses. The most prominent shrine is Namugongo which is located where St. Charles Lwanga and his companions were burned. The Ugandan tradition of honoring martyrs is important because Ugandans are honoring their pre-Christian heritage of spirituality and ancestry. The martyr's feast happens on June 3, and there are about half a million people who participate in the feast annually, and the day of the feast is a national holiday. Many pilgrims come from Kenya, Rwanda, Tanzania, and all over Uganda to take part in the Ugandan Martyr's Feast Day at Namugongo, and many others follow the celebration on national television.[5]

Aww, there are no news yet.